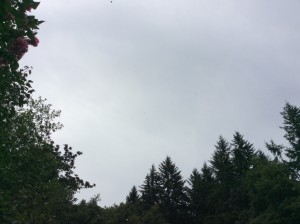 Cloudy sky after the thunderstorm.

Just an aside, it’s lightly raining here now as the result of a thunderstorm rolling through.  We certainly need the moisture.  But back to the topic.

I was carpooling with Catherine on our way to early Mass this morning and at one point I took the opportunity to thank her for the lovely dinner party that she and Dana put on some a few days ago.  And we were commenting on how it was so Camino.   It just took us back so easily.  And so six of  the  eight people at the dinner had walked in Spain and all of them have Phil’s Caminoed, so we knew the drill.

But one thing Catherine said commenting on the occasion and saying something about us was that, “Camino people are easy.”   And that took me back too.  And it’s true, no?  We/they are generally happy and appreciative, not much is a problem.  Everyone helps out and contributes.  We/they would be embarrassed to be too demanding or having some quirky special need.   Not that we/they wouldn’t ask for help when we really needed it but “would hate to be a bother.”

Yup, have to run, Felipe.

« From Angels From All Angles
Before The Heat Of The Day »

2 thoughts on ““Camino People Are Easy.””