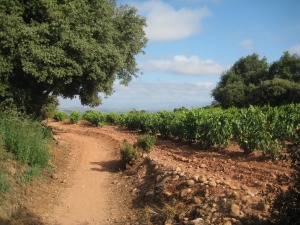 Little gifts are coming at me. I am doing my best to catch them and to examine them and be thankful for each. These are realizations resulting from seeing my surroundings, physical and otherwise, from new viewpoints, new perspectives, I think.

Remember when we were walking and we were in the middle of nowhere, and we were in that stage between pain earlier and tiredness later. That’s right, the giddy stage. We had mastered pain for the time being and we still had plenty of energy left to walk and learn about each other. We talked and we had time and we explored each other. Is that sounding too weird to say? Somehow in that process I was not only hearing your story but magically I became your story. And maybe you became my story, I don’t know for sure. I was seeing things through your eyes is maybe a more conventional way to say it but it was stronger than that. It was more than an intellectual understanding. And maybe when one does this with enough people you just get the ability to lose yourself which I think is what I am experiencing now.

And this is part of being a Caminohead, don’t you think? And maybe part of the reason I think so much of you. SJA, Phil.

« The Grainfields
It’s Fall in the Northern Hemisphere »