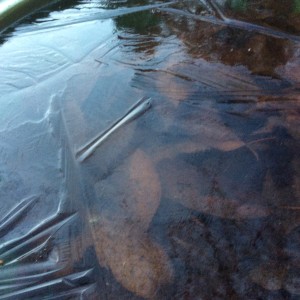 Nice phrase and it is sticking with me this morning. I feel like I am experiencing that more and more these days, not all the time but still noteworthy. Something has changed in the last month to calm me down in a very deep way. I’m reporting here and attempting to give myself and you a rough idea of what’s going on.

This all started back at least a month ago when I started a meditation exercise that I came up with. A guy that can build his own Camino can come up with a reasonable mediation practice, right? So, to review, I am quietly flat on my back in the early morning hours practicing, putting to use, my times of sleeplessness. The idea is that I am inviting God in to the site of my cancer to bring some peace and harmony to that area, to that battlefield.

This lead to me starting to pay attention to my lungs in a very intimate sort of way that had escaped me up until this point. It had been some obscure place that I couldn’t access but now I was there seeing for myself the chaos, the damage, the disharmony of that area in the very core of my body. And going there with God to bring some relief was changing things for me, I was breathing easier, so to speak.

Next time I am at the hospital I am going to have the staff give me a graph of my blood pressure readings over the last four months. The last two times I was there my numbers we good for me, that being in the last month. Was something showing up?

Anyway, this morning I was doing my practice and the thought came to me about how closely my chemo was resembling the military move where you call air strikes in on your own position. Why would that happen? Well, it is the ultimate “jump the shark” move and obviously only done when there is no other option. The situation is that the enemy has overrun your defenses and is among you and that is only going to get worse for you and as the commander you call in death and destruction from the sky on the whole mess. Your guys are smart enough to know to dive under some cover last minute will fare better than the enemy who has just arrived and has no idea of the layout and is running around on the surface. Well, that’s the theory and the result is not going to be pretty whatever because we all know about theories.

Yea, well this has been just a little bit of reportage from the front. Just a reflection on the last two years of calling in air strikes on my own position over and over again every two weeks. It is definitely starting to resemble the movie Groundhog Day with it’s repetition. Am I trying to do something different all of a sudden? Have I learned anything? I guess so.

Here we are creeping up on New Year’s Eve. It is cold here just like it is supposed to be, I guess. OK, enough of this loves, Felipe.

« Don’t Get Overwhelmed
Would it be OK? »