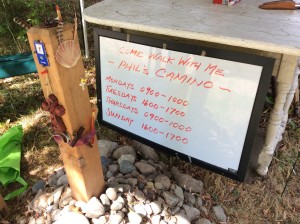 A stormy day today here on the Island. The trees are bending this way and that. Weather moving through at a fast rate. The power is down so we have the generator fired up. Trying to get the blog out to you where you are, Radio Free Camino.

Met with my Telious Bible Class early this AM and we covered The 10th chapter of Matthew. In the second through the fourth verse my version says: “Jesus called twelve of his followers and sent them into the ripe fields. He gave them power to kick out the evil spirits and to tenderly care for the bruised and hurt lives. This is the list of the twelve he sent:
Simon (they called him Peter or “Rock”),
Andrew, his brother,
James, Zebedee’s son,
John, his brother,
Philip,
Bartholomew,
Thomas,
Matthew, the tax man,
James, son of Alphaeus,
Thaddeus,
Simon,the Canaanite,
Judas Iscariot (who later turned on him).”
And going back up the list to the third name of James, Zebedee’s son, that is St. James or Santiago in Spanish, who we know and love.

Locally, in the corn news, the field has been harvested of remaining ears to feed a neighbor’s hogs. And I will chop up the stalks with my brush cutter and till that into the soil with the rototiller to get some more organic matter in there. Then a cover crop of rye and red clover goes in for more organic matter. Big fun. Then next spring after the field has a winter of sleep and I am still around we can start the process all over or Wiley can.

Our Anamaria is back in Madrid after spending a week or so on the Camino in between Burgos and Leon. I will try and pry some insights from her when she is ready. We will not rush the Princess.

We here at Phil’s Camino are going down the west side of the Pyrenees and into Roncesvalles. We are terribly slow but maybe things will pick up with cooler weather. It is good to be walking with the Spanish overlay in place as it sparks all kinds of great conversations.

Well, have to go for now. Check the generator, wrestle with paperwork, look out the window, all that good stuff. Electric loves, Felipe.

« A Bowl Of Tomatoes
A Goulash Of Possibilities »