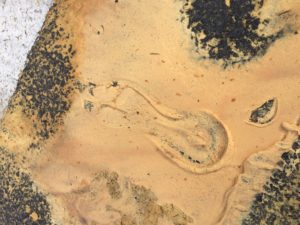 Here is some pollen that collected at the low end of the church parking lot here on the Island. It is half an inch thick where the footprint is.

Hi, the best to you.  I have two reports for you today.  One is about yesterday’s event at St Michael’s in Olympia.  Continuing from yesterday’s blog post where we were driving down, the five of us plus a film crew of three were there.  Albout 55-60 folks showed up. They sat for the short version and Annie and I did at least a half hour of Q and A and My Rebecca joined in to help with that.  I think everyone took something away of value with them.

Then last evening Catherine made all of us a dinner and afterwards we watched the new long version.  It has the new original musical background.  At the moment it still needs color and sound correction but the story is being told.  It seems pretty impossible that it could be better than the short version but everyone is loving it that has seen it.  It really fills out the story better and more completely.  There is more Kelly, more Wiley, more Spain.

Yea, it is alperfect once again.  Thanks to you for checking in.  Let me go for now.  Love, Felipe.