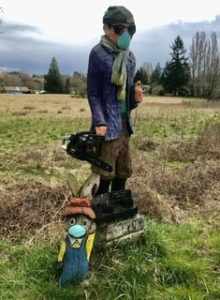 Let me explain the pic above. This is Cool Gary, an Island character that grew up here and passed on early in his life. He is remembered in this rugged chainsaw carving which is along the Vashon Highway just south of Vashon town. It was done by Gene Amondsen another Island character who was a pastor, artist and part time abolitionist. He is unfortunately no longer with us either. Anyway, there is Gary with his chainsaw and some kind person has winterized him with a warm hat and scarf. There is a little wood elf at his feet. Reminds me of the usual statue of St Francis with the ever present birds and rabbit.

Catalina is going to love this. She will undoubtedly see to it that I get some sort of recognition in the art history world! And as usual there is always some symbols of what is going on in the world around us. Two summers ago there were some huge road projects on the a island and Gary sported a hardhat for that. You can see the color coordinated masks that protect them now giving us a reminder out of the corner of of eye to be safe as we cruise by. One day I was driving by and an owl was perched on his head and I said how clever of someone to put that there but it flew away.

Also in the news Cris, CSABC, and myself had a big powwow on Zoom yesterday in preparation for our big worldwide conference on Friday with all of our Bureau Chiefs. This is a first. We will compare notes on the situation. The goal is to come up with some sort of appropriate and robust crisis response to life as we presently know it. More on this later.

So, be safe, carry on and praise God loves, Felipé.