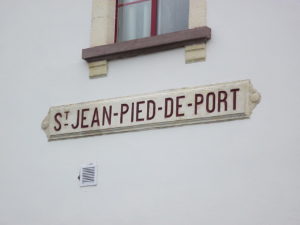 I finally got a hold of Kelly, my old Camino walking buddy. I love Kelly! He is always really for a new adventure on a moment’s notice. I wanted him to be with us as we start the latest walk on the Camino Frances here in the “backyard”. Just like July 2014 when we started out like innocent babes from St Jean Pied de Port on the killer hike over the Pyrenees.

And Rick is supposed to come today also. Rick flew into Spain in August ‘14 to be with me on the last part of my Camino. He surprised me by bringing his daughter Maryka with him then to join us. It was a great time! And Rick will be here also today to add to the frivolity.

These days still I get weepy when I see Kelly and I gearing up to walk that first morning at SJPP on the Phil’s Camino documentary. How many times have I seen it? And I know it is coming and boom! Crazy!

That could have been the hardest day of my life. Or it is in the top three for sure. It took every ounce of our reserves to complete that walk. We were both on fumes when we coasted into Roncesvalles. There were times that day when Kelly egged me on and other times when I had to egg Kelly on. But we got it done in the end, it wasn’t by any means pretty.

On the last part which we walked downhill through the woods. The patches of clay were extremely slippery and a matter of fact that route was closed as the day before someone had broken their leg sliding around. But we went that way because we missed the warning signs. And the very last few miles when we were totally out of our minds was down and to the right as we descended. And there were no sounds of civilization coming in at all. And I would say to Kelly, “Come on man they are waiting for us can’t you here the corks popping!“ And Kelly would say, “Yea, I don’t hear the brass band, they probably got tired of waiting and went home!” Our good natured banter continued all our days there.

« Another Fall
From John, The First Born »

2 thoughts on “Starting Out Again”